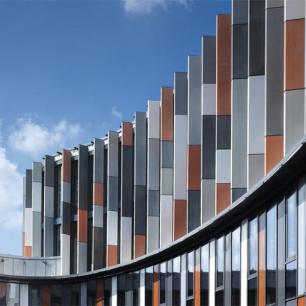 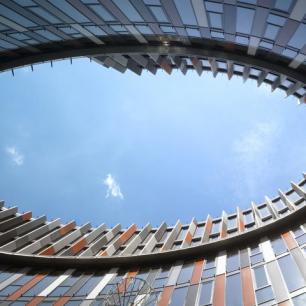 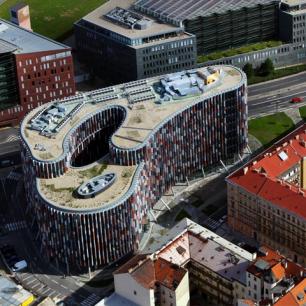 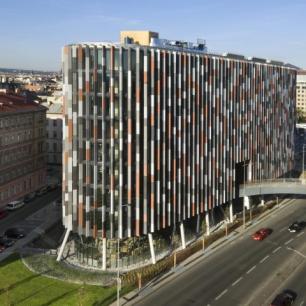 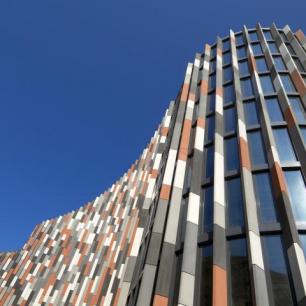 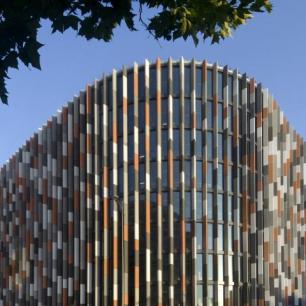 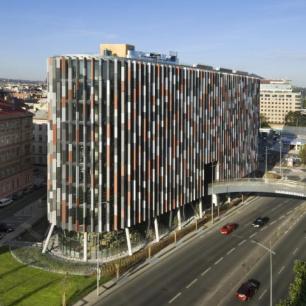 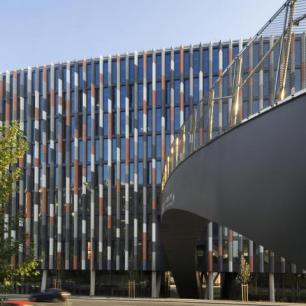 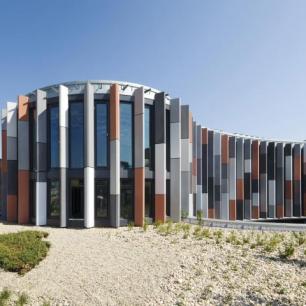 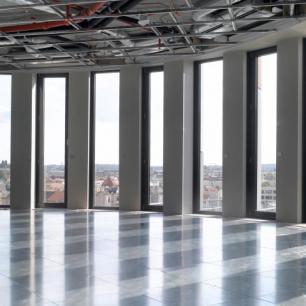 Unique architecture, a distinctive environment-friendly building and, primarily, highly efficient and comfortable indoor areas – that is how the Main Point Karlin project can be described in a few words. This ten-storey office building with a lettable area of 22,000 square metres has ambitions to reach LEED Platinum - the highest rating for sustainable buildings.

The architectonic and technical interesting features of the building include, for example, expressive facade pillars, which work as sunshades, or the building cooling system, which uses river water and an innovative system of comfortable induction units. Great emphasis has also been placed on the quality and cleanness of the indoor environment, including sufficient amount of daylight and noiseless operation of all the building technological equipment.

The Main Point Karlin project implemented by PSJ INVEST has become the first one in the Czech Republic to receive the LEED PLATINUM certificate from the U.S. Green Building Council (USGBC). The building reached the absolutely highest rating, which can be reached within this prestigious international rating system, and has become the first building in Central and East Europe that can pride itself in having such high rating.

The Platinum rating was awarded to Main Point Karlin for achieving extraordinary results particularly in the fields of energy utilization, indoor environmental quality and innovations. The energy efficiency of Main Point Karlin is thus better by up to 38 % as compared with a standard office building defined by the ASHRAE standard.

The goal was finding a key to placing a 10-storeyed building of 22,000 square meters of office areas on a very small plot and making it look much smaller, fitting in the neighbourhood and making the harmony with the surrounding builings. The structure of the new development exploited the planned site to the maximum and became an irreplaceable dominant. The selected footprint respects all regulative constrictions and at the same time offers maximum usable areas maximally utilising the approved height – 10 above-ground storeys with the two top ones stepping back to Pobrezni street.

The Main Point Karlin project is a wedge inserted between the adjacent modern buildings on the one side and scattered buildings of the old Karlin neighbourhood on the other side. Soft curves neither compete with the close office buildings nor establish an impenetrable bulwark towards the Karlin neighbourhood; on the contrary, they open to pedestrians crossing river on the bridge and offer a quiet space of a wide roofed passage right under the centre of the building.

The architectural design of the Main Point Karlin office building unites the harmony of organic soft curves in otherwise straightforward and consistent architecture. The non-traditional round shapes of the building allow a new approach to utilisation of space and the fluent façade curve allows placing quality work places along the buildings whole perimeter.

The unique façade is dominated by operable French windows floor-to-ceiling high; there are erected moulded vertical pilasters between them, there area erected the moulded vertical pilasters in unusal orange, white, silver-grey and anthracite colours design made of glass concrete. So, the building acquires the depth and dynamically variable shape when viewed from the outside.

The final effect is achieved by an open interior atrium stretching ten storeys up letting the day light in to the whole building and its internal areas, and a large green roof terrace on the two top recessive storeys.

Thanks to its organic shape the building offers very effective spatial and functional arrangement; the facade’s uninterrupted curve allows placing full-value work places along the whole perimeter without establishing the so-called dead or dark spots. The façade is moulded according to the arrangement of work places. These modules may be fitted with partition walls and so the rooms may be utilised in many different ways – from individual offices to open-space ones.

The design allows articulating the building both horizontally and vertically around the three cores. The building provides absolutely free office space without any barriers, plinths or fancoils placed within the area allowed for employees.